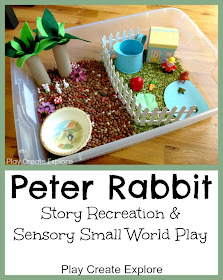 Lawson loves "The Tale of Peter Rabbit" and we have the version illustrated by Lisa McCue.
Because this books a favorite around here, I've been collecting items here and there to create a small world sensory bin where L would be able to re-create the story, and then expand on it with his own imagination as well. I tried to fit as many elements of the story into the bin as I could and just work with what I had at home already and a few things such as the watering can and the Peter Rabbit bowl are things I found at Goodwill over the last few weeks.

-green split peas and mixed dry beans for the filler

-some of our fake fruits and veggies for farmer McGregor's garden

-craft foam cut into a semi circle for the pond,
complete with the cat (a mini toy tiger) that Peter's cousin told him not to talk to.

-watering can (which peter hides in in the story) 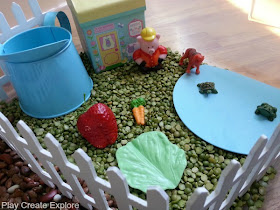 -"fir trees" made of a cut in half paper towel rolled with some hot glued felt leaves, where Flopsy, Mopsy, Cotton Tail, and Peter's Mother live. These trees were originally made for our Apple Picking Sensory Bin, which you can see HERE. 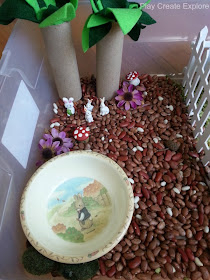 Some of the items I threw in that bowl you see above were a chamomile tea bag (because Peter's mother gives him chamomile tea at the end of the story), a simple coat and shoes for Peter (that he loses in the story), and an extra bunny... just because lol. 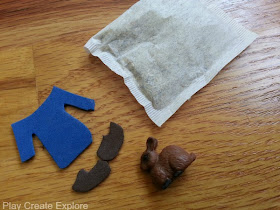 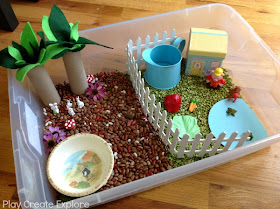 I read the story slowly several times whiles L acted out the scenes as we went along.
I'd stop for him to elaborate on things if I could see he was really into it. 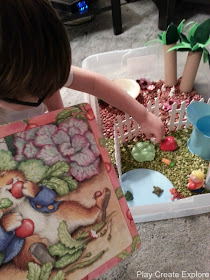 L LOVED acting out the story while I read, but later played with it on his own and
Peter Rabbit had even more adventures in the garden. 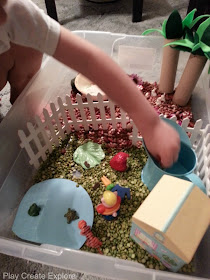 The reason why I used beans as a filler for this small world bin,
was so that my youngest (21 months) could play with it afterwards as a sensory bin. 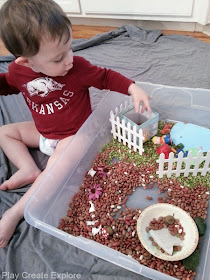 To see ALL of our Sensory Bins and Small World Play,
click the photo below! 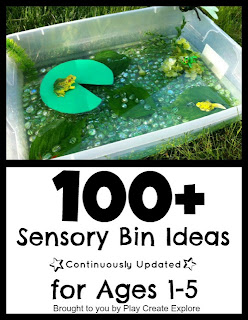 Do check out these other awesome Peter Rabbit Sensory Bins!
from Handmade by CJ
from Make, Do and Friend via Toddler Approved
from In Lieu of Preschool