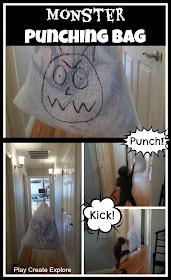 After being stuck indoors with colds for a few weeks, it was clear that my boys needed some Gross Motor Activities to encourage LARGE movement! I fashioned this "punching bag" by filling a large trash bag with some wadded up newspaper and other smaller plastic grocery bags. I hung it from the ceiling in the hallway with some yarn and duct tape. Later, for added play, I quickly drew a monster face with a Sharpie (King Size Permanent Marker, 12 Black Markers (Google Affiliate Ad). When I made this I had NO idea just how much fun my boys would have with this. It was kind of crazy how simple it was but how much play this thing got! 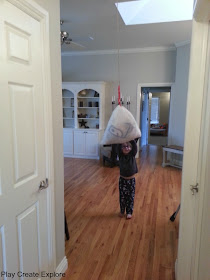 There was LOTS of running and jumping to punch or kick the bag as high as it would go!
He would often start running from the other end of the house lol. 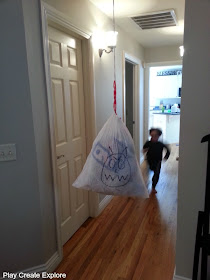 and of course, lots of kicking... 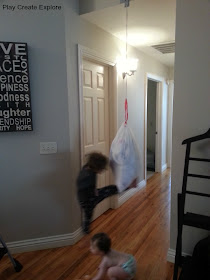 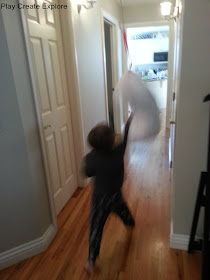 and it even encouraged my late walker to get up on his feet! Big YAY!

This thing hung in the hallway for days and saw lots of action from everyone! It was hard for anyone to walk by it and NOT kick it! It even got a few HIYA'S from my 14 year old stepson!
It turned out to be the perfect Gross Motor Activity that mostly L (4 1/2 yrs) was needing after being cooped up inside for so long!

Oh, an added bonus...it completely wore L out! He didn't resist nap time at ALL and slept for hours!

Click the picture below for another totally fun and easy
Gross Motor Activity for Indoor Play! 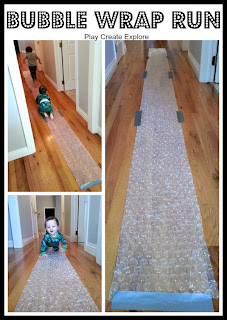 Visit my Pinterest Board for Simple Indoor Play for other fun ideas! 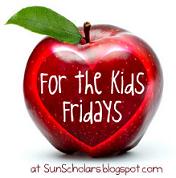